Shrine of St. Nektarios of Aegina 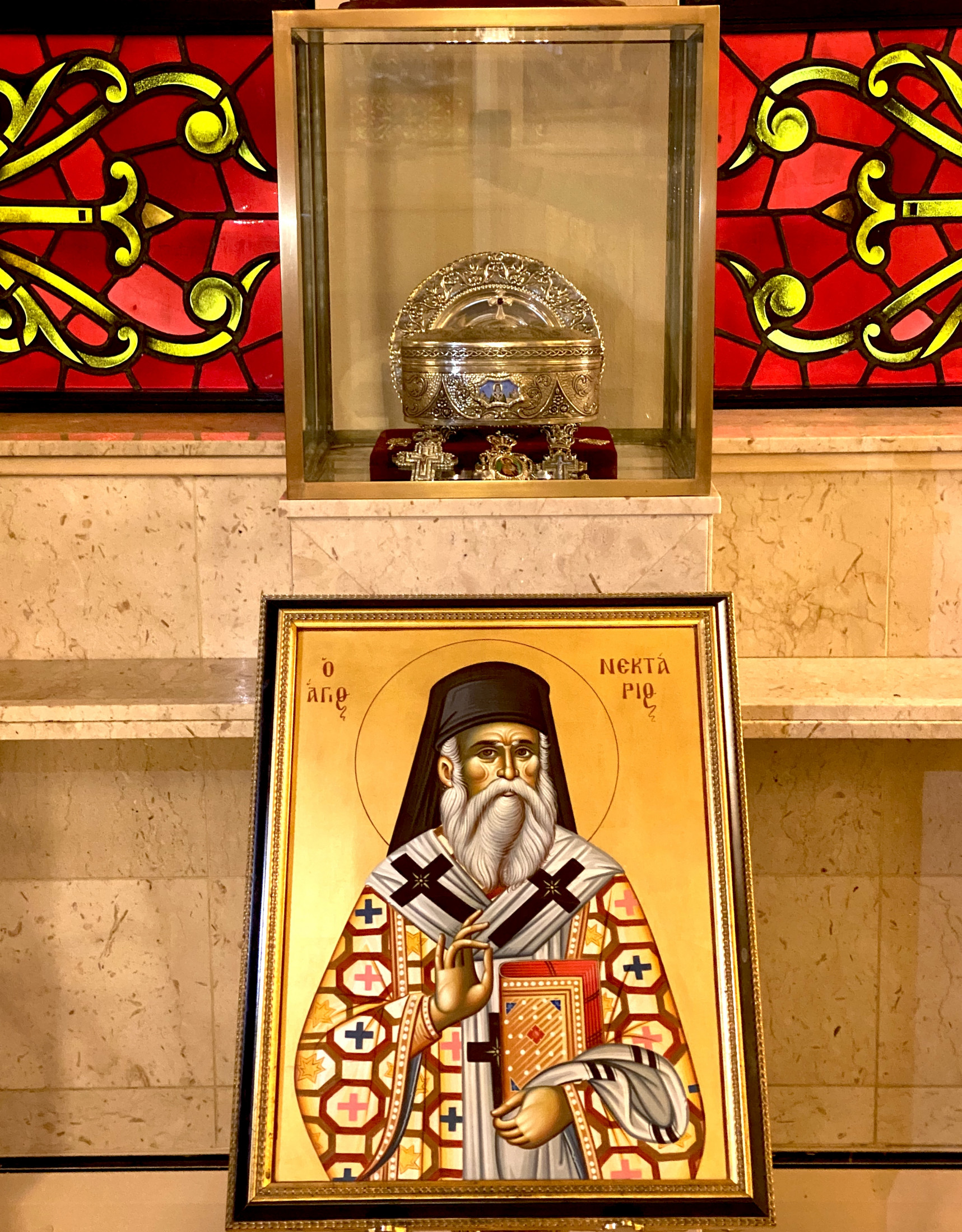 In 2006, to mark the 75th anniversary celebration of St. George Greek Orthodox Cathedral, the parish established a shrine honoring a profoundly popular 20th century Greek saint, Nektarios of Aegina. At the heart of the shrine is a relic (a small fragment of the saint's skeleton) donated to St. George by Holy Trinity Monastery, the women's monastery founded by the saint in the early 1900s. During his lifetime, St. Nektarios (1840-1920) was widely recognized as a gifted spiritual counselor and confessor. Since his death, hundreds of miraculous healings have been credited to him. Amoung Greeks and Greek-Americans he is widely regarded as the prototype of holiness in the modern era and his following is immense.

Born in what is now northern Greece, the saint was the son of poor villagers who could not afford to pay for their son's education. Like many Greek boys at that time, he left home in his early teens to seek his fortune. Working first in Constantinople and then on the Aegean island of Lesvos, he acquired enough education to become a village teacher, and then entered monastic life at age 30. At 42, he enrolled in the University of Athens Theological School, and at 46 he was ordained to the priesthood for service to the Greek community in Egypt. His rise to prominence was rapid in Egypt and in 1889 he was consecrated Metropolitan of Pentapoleos.

Nektarios' career collapsed when rivals accused him falsely of plotting to replace the Patriarch of Alexandria, and Nektarios was exiled, penniless and unemployed to Greece. He struggled to find a position, eventually securing a post as a preacher on a small and obscure Greek island. His preaching soon attracted widespread admiration, as did his profound modesty and service to the poor. Friends of Egypt helped rehabilitate his reputation and he was soon appointed headmaster of the Rizarion Ecclesiastical School in Athens. After 16 years as a seminary headmaster, Nektarios devoted his retirement to the founding of a monastery on the island of Aegina, close to Athens.

Nektarios lived a humble life there, gardening, making shoes for the nuns and talking with the stream of pilgrims who came to him for spiritual advise and help with their ailments. Long before his death from prostate cancer, many healings were attributed to him. Like many important Orthodox saints, Nektarios' body did not decompose for many years after his death and emitted a sweet fragrance. The monastery and the tomb of Nektarios soon became one of the most important Orthodox pilgrimage sites in Greece.

The shrine at St. George includes the saint's holy relic, which is visited and reverences by the faithful, a marble enclosure and new iconography - including a full length icon of St. Nektarios is a monk's habit directly behind the shrine and an unusual icon of the saints deathbed scene. St. George's then-pastor, the Very Rev. John Heropoulos conceived the project, designed the shrine and kindled the enthusiasm of the community. It was dedicated in October 2006 by Archbishop Demetrios of America and Metropolitan Nicolas of Amissos, the leader of the Carpartho-Russian Orthodox Diocese of America, who interceded with the nuns of Holy Trinity Monastery on St. George's behalf.